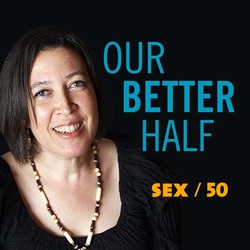 Today’s topic is sex. Don’t panic! It’s actually, more specifically, about a dear friend’s journey to becoming a sex pod-caster.  Ok, now you can panic. I’m kidding. It’s not scandalous. It’s hysterical. As is her show, “Our Better Half: Sex Over 50.” In a few weeks she’ll be interviewing me. Am I nervous? A little. I’m not a big one for talking about sex, but I’m game. I figure we’ll laugh our sexy little butts off the entire time and you know me, I’m always up for a good giggle. Particularly if it’s at my expense! And now, without further delay, I am happy as a battery operated device in an adult toy store to introduce writer, blogger, author, and newly minted sex pod-caster, Laura Collins Lyster-Mensh. Read on. Giggle, And click the link to her show. In private, of course!

A Funny Thing, or Two, That Happened on the Way to My Podcast

Being a sex pod-caster, as it turns out, isn’t that sexy but it does raise the heart rate.  For one thing, I have to say the word “sex” out loud a lot, which is not something you hear from middle-age moms all the time. Or at least not THIS middle age mom. When I decided to start a humorous podcast about sex for people in the “Second Half” of life, I thought it might be interesting. But it turns out it’s a bit of welcome scandal.

I may not be having more sex, but I am having a lot more laughs, and at my age that’s not nothing.

I laughed when the renowned Dr. Ruth emailed to wish me luck but was too busy with travel to be interviewed. I looked at her Twitter feed and you know what? She is! That 89 year-old is busier than anyone I know of any age. And if that’s what talking about sex does for you, I’m in.

I got a chuckle when my mother-in-law, instead of recoiling when she heard about my “sex over fifty” podcast started sending me neat little clippings from the paper on topics that, shall we say, we don’t usually discuss. I hear I’ve raised her popularity at the hair salon now that she can humble brag about her daughter-in-law’s “dirty radio show.”

It’s hysterical that I’ve bookmarked websites that most people hit “clear cache” for, at my age.

My email spam has gone from do-it-yourself backdoor sheds to… doing things at back doors and in sheds. I have to open my email hunched over the screen if I’m in public. My friends forward me things that make me go “huh?” And then “OH.” And then “MY.”

I’ve said “penis” into the ears of former colleagues who I would be too shy to invite to dinner. I’ve suggested therapeutic orgasms to folks who know how poorly I maintain my lawn.

It’s funny that one of my friends, on hearing me talk on the broadcast about daily orgasms, said that her “better half” would be all too happy to hear it and so she listens to my episodes on one tab with the only visible site being a BBC show on manners. Golf manners, no less.

I was thanked today by a friend for reminding her to do her Kegel exercises. So now my friends think of me fondly when they sneeze.

I cried the first day, but laughed later, about the sexpert who declared me unqualified to ask questions about sex because I had never even taken a field trip to a sex toy shop. I never said I was an expert, or particularly kinky: I’m a journalist. I ask questions. So I’m asking myself: “Why haven’t I ever been to a sex toy shop?” And the answer is: “Why are you hosting a podcast about sex?”

Getting people to be interviewed hasn’t turned out to be too much trouble. Everyone wants to talk about sex. Not their sex lives, of course, but everyone else’s. It’s off microphone, however, that I hear all the good stuff. If only “off the record” meant “record.” Maybe it does!

The best thing about my new gig is the giggling. I giggle about the people I want to interview and with the people I do interview. I giggle as I spend my days editing audiotapes full of words I probably pronounce wrong. I giggle at the particular sotto voce way people talk to me now, and I outright guffaw at the idea of ME doing this. I even giggle when my husband asks when I can find time to practice what I preach! Which isn’t good.

But it would make a great segment for the podcast…