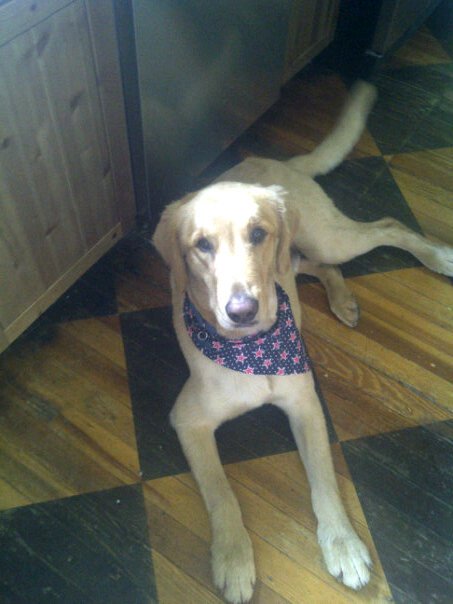 Hard to believe it’s been six weeks already. I miss you. The boys miss you. And the dogs, well you know about Pete. He missed you so much, he went to be with you. (Tell me; is he as stinky in Heaven as he was on earth? Really, hon, nothing smelled like that hound.)

The cars have taken their turns trying to join you, too. The Durango quite literally called it quits on me and Casey one day on Rte 17, and the Mustang’s been a pain in the butt, too.  Did you know the damn thing leaks? It does. So now, because of all the rain (could you speak with the Big Guy about that? Thanks), it lives in the garage. Rumor has it, despite the occasional pissing match, the Stang’s very happy next to Dave’s Porche’s.

Oh, and speaking of the cars, I had to give up the Marine Corps license plates. I went in to re-title the cars and they made me, big meanies. Yes, I cried like a ninny in the DMV. Right up until the moment they suggested I replace them with lighthouse plates. Lighthouse plates? Beach? You bet!

As your all-time favorite Pisces, I feel safe in assuming you’re pleased with that pick.

You’d be pleased with your boys, too. Casey is getting a scholarship tonight! We don’t know who from or what for yet, but who cares? It’s a scholarship for our son. The one we’ve been worrying about for years.

Cuy is having a kickass flag football season, his grades have stayed strong, and I continue to be convinced he’s the next Jerry Seinfeld. A shy Jerry Seinfeld who’ll only tell jokes to his mom, sometimes his brother, and definitely the dogs. But Jerry Seinfeld nonetheless.

And on that note, we’re back to the dogs. Grundy and Tug miss you madly. But, just to show they’re soldiering on, Tug continues to get sopping wet several times a day.

He isn’t filthy in this picture…

but give him five minutes.

Time’s up. Damn that dog. Gotta get the hose, handsome. Miss you.